A person of Doug Smith’s vintage carries with them an endless array of ideas and creative forethought brought about by years of hot rodding enlightenment thanks to an early inception into the car crazed scene. END_OF_DOCUMENT_TOKEN_TO_BE_REPLACED 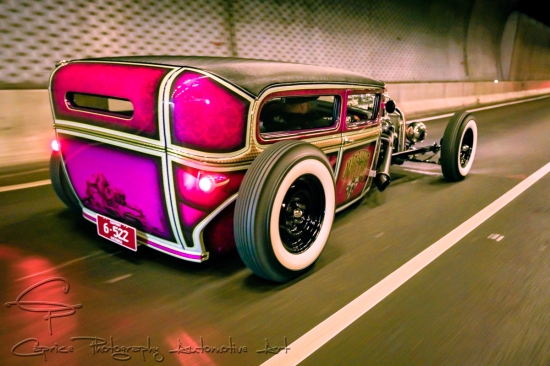 Advancements in Modern technology have given us the ability to evolve into a more sophisticated way of life while easing the physical strain on our bodies as we strive to “build a better mouse trap.” This also rings true when it comes to retaining the traditional statue of our favourite vocation while combining the latest innovations into our hot rods and custom cars. We’ve seen advancements in chassis technology thanks to computer aided design (C.A.D) along with ECU run fuel injected motors allowing us to run strip and street at the touch of a button.  END_OF_DOCUMENT_TOKEN_TO_BE_REPLACED

For those of us who have built our own cars, we know what a budget is. It’s that financial figure we conjure up after estimating the value of the build minus the chunk on top that we present to the department of war and finance in the hope we get the go ahead to build our dream machine knowing full well our estimated budget is set to be blown to smithereens in the process!

But not Dale, he’s right onto it especially since his skills and experience allows him to take care of the majority of the manual labour himself. Dale, a home renovator by day, has had no less than 26 automotive dream machines come through his garage seeing them leave in a better finish than when they arrived.

END_OF_DOCUMENT_TOKEN_TO_BE_REPLACED

As 2016 rocks and rolls its way into the twilight of its conclusion, we find ourselves in the northern suburbs of Melbourne, Doncaster, overlooking the hazy hue of the city in the distance. Stepping away from the traditional wide open carparks we’ve become accustomed to, we find ourselves confronted with a multi-level complex giving a new dimension and twist to the traditional style parking. Rob being the kind of guy to not shy away from a challenge, took it in his stride and produced a unique layout of cool rides, trade stands and food venues giving the rockabilly scene more of a street festival than the tried and tested ground level parties we’ve become accustomed to.

END_OF_DOCUMENT_TOKEN_TO_BE_REPLACED

“I always had this passion to bring back a classic car from the United States and initially, as I love surfing, I was considering a woody of some kind. I was thinking of a Chrysler Town and Country which was a two door vehicle with wooden panelling. I was out in Livonia, Michigan, about an hour out of Detroit and I saw one up there but it was in so many pieces and would be so much work, I just couldn’t have done it. The next day I went to the Henry Ford museum (Greenfield Village) and onto the Ford Rouche plant where they make the F150 and they have a display of finished Ford classics in their foyer and the last car on display was a 1955 T bird which I fell in love with!  On my last day in Detroit before flying back home, I decided to look at the classifieds in Detroit and there was a T bird for sale just down the road in a warehouse. END_OF_DOCUMENT_TOKEN_TO_BE_REPLACED 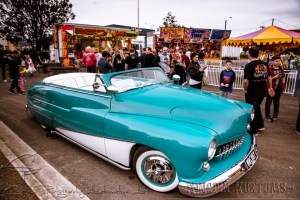 Waltzing Matilda Hotel in Springvale was the latest ALH venue to host Rats, Tatts n Pinups and their five band line up. Located in the Eastern suburbs of Melbourne, the venue’s large parking area filled up very quickly with the usual array of old school eclectic rods n rides as well as a good gathering of custom and classic bikes!

END_OF_DOCUMENT_TOKEN_TO_BE_REPLACED

There’s no such thing as a production line hotrod. Every one of these unique machines has been built by someone, be it a solo effort in a garage over many weekends or by a team of professionals in a purpose built premises. But don’t always assume the person behind the wheel is the builder, some rod owners prefer to appreciate the machine that has been built by others. This by no means takes anything away from the rod owner as they themselves still love the hot rodding scene, know their way around these unique cars of craft and simply prefer to spend their time enjoying the hot rodding scene in a machine that just ticked all the right boxes for them. If the glove fits, wear it!

END_OF_DOCUMENT_TOKEN_TO_BE_REPLACED

Starting up a new business from scratch can be pretty daunting especially when your business requires a large premise and expensive equipment! Creating enough fuss on start up to attract attention is another challenge and, if not done right, can be the beginning of the end of your business!

Brendan and Joanne are a young couple taking the dive into self-employment with an automotive based business requiring a decent financial outlay required to do it properly as well create the right amount of attention to make sure your potential customers know where you are. END_OF_DOCUMENT_TOKEN_TO_BE_REPLACED

The biannual Chev Convention put on by the 55 56 57 Chevrolet club of Victoria found itself in a new location this year. Situated on the banks of the Murray River, the twin towns of Echuca and Moama played host to the club and participants of the 11th bow tie spectacular. The historic port of Echuca with its paddle steamer fleet, historical buildings and open view streetscape complete with horse and carriage rides was the perfect setting for a family weekend away combined with their favourite vocation of classic cars and cruising.

END_OF_DOCUMENT_TOKEN_TO_BE_REPLACED

There was a buzz in the air as word had spread around on the digital vine that the Big Bad Wolf was coming to town and an old s’cool rumble was going down! This wasn’t going to be your standard car park car show but one to be remembered in the archives of hot rod history, or until the next rockabilly event put on by those cool cats of Kingpin Kuztums! END_OF_DOCUMENT_TOKEN_TO_BE_REPLACED