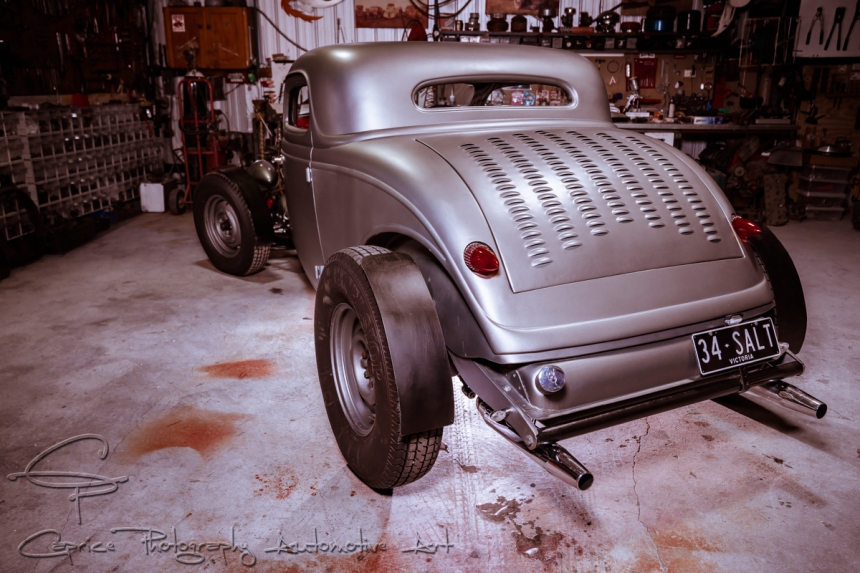 A person of Doug Smith’s vintage carries with them an endless array of ideas and creative forethought brought about by years of hot rodding enlightenment thanks to an early inception into the car crazed scene. 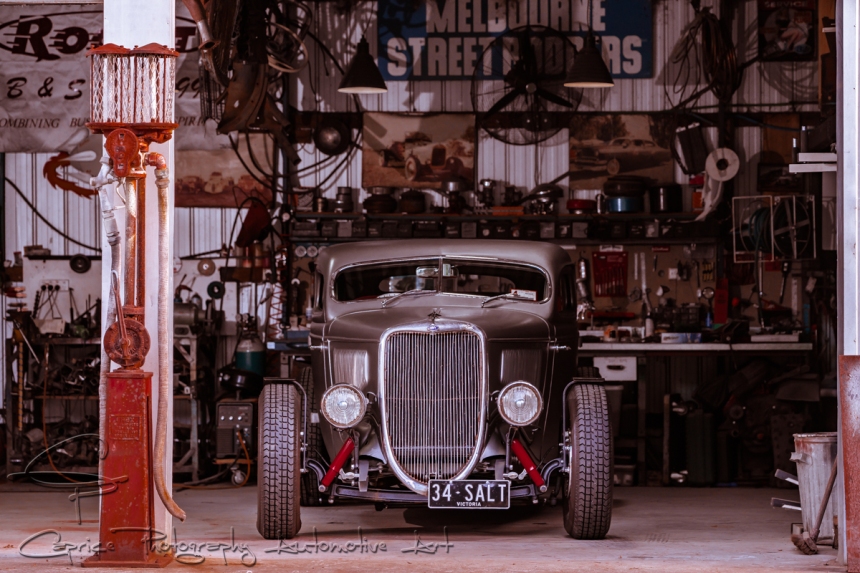 At the tender age of 19, Doug’s first build was a 1940 Ford ute purchased out of the South West Victorian town of Warrnambool. With a small block motor bolted to the stock drive line, it didn’t take long for the tired 3 speed to give way and be replaced with a four speed Munchie! The old pick up was followed by a succession of eclectic rides including A model roadsters, a 54 Chevy, Pontiacs, Cadillacs and Galaxies. There’s no bias here when it comes to tasting the fruits of our automotive engineering forefathers although he does admit to having a soft spot for the blue oval badge. 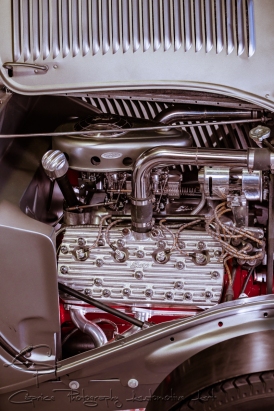 During the 1980s, Doug invested time and money into his own business at Rocket Autos selling engines and parts gaining valuable knowledge along the way and earning himself the nick name of Rocket. All this knowledge and experience has culminated itself into the classic bare bones styled 3 window coupe you see on the pages before you. “I’ve always had roadsters and never had a coupe so I thought it’s about time i did a coupe. I’ve always liked the Rolling Bones stuff and had a soft spot for 3 window 34s and highboys. I thought Ive gotta do something different so I got the 39 screen and took it down to Kenny at Deuce Customs and i asked him if he could fit one of them into one of his rods. He laid it back, we took a few measurements and he said not a problem. I said I want it at this angle and this height “explains Rocket. 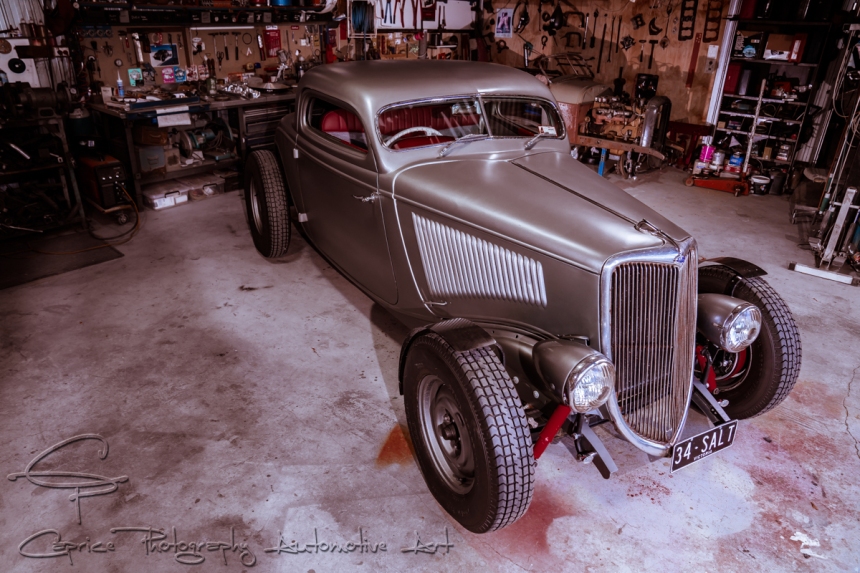 Starting with a Lilo chassis, Doug chose to retain the 32 rails from the firewall forward for prosperity and stepped the rear up four inches down back allowing the body to sit low over the diff yet retain full suspension travel. 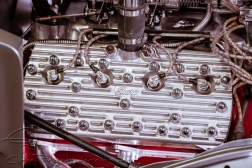 Doug’s always preferred the look and sound of a flathead motor and set about building an 8BA for his latest project. “I’m a flathead guy. I’ve always loved the sound of a flathead. The exhaust note sounds similar to a Harley going down the road. It’s a deep throat sound. There’s whole heap of metal to get through before the exhaust comes out the block and adds to the note.” The healthy block required a hone along with rings and bearings befor 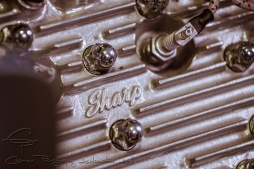 e bolting on the polished Sharp heads and inlet manifold. New Twin 97s feed fuel into the V8 rather than onto and around the engine. “They were an expensive item to buy being brand new chrome 97s. They set off the motor though. I’ve always had 97s that leak but these have got the better seats and seals in them so they are worth it!” 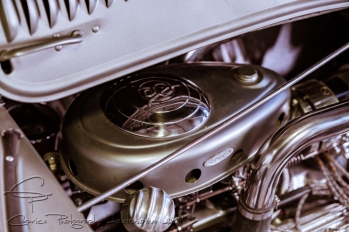 That custom air cleaner on top has you scratching your head as to what its origins are. You see, Doug loves a swap meet and loves finding various bits and pieces that his creative mind can turn into something else at a later date! “I walk around the swap meets and find stuff and my mates quite often say “and now what are you going to do with that?!” I just say I reckon it could make a good air cleaner. There’s always something different to be found at swap meets. I like to be different, I don’t like the off the shelf stuff.” That air cleaner you see before you used to be a fuel tank off an outboard motor! That’s creativity and it looks the part too!

A single rail gearbox mounts up to the flathead thanks to an adapted bellhousing knowledgably modified by one of Doug’s club members. A Compact Fairlane diff puts the power down assisted by long ladder bars and a transverse spring. 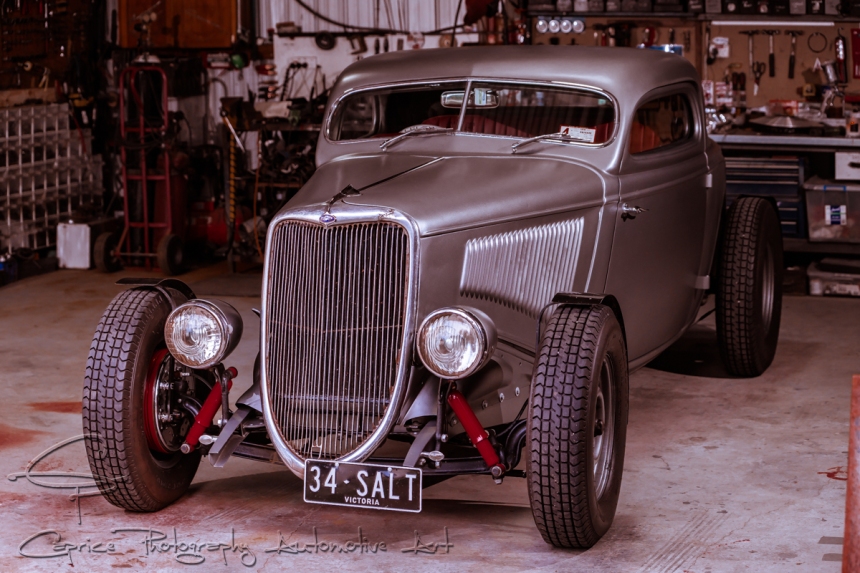 Out front sits a 1940 model 4 inch drop axle I beam with 1940 wishbones. Doug has found these axles are a little wider in the girth adding to the aesthetics of the highboy while granting the driver a better turning circle. A twin master cylinder operates the Bendix drums up front and Fairlane drums on the rear. Excelsior Stahl sports radial tires roll on 16 inch Mainline rims giving the satin finished Young Gun Grey coloured rod that dirt track look Doug was after. 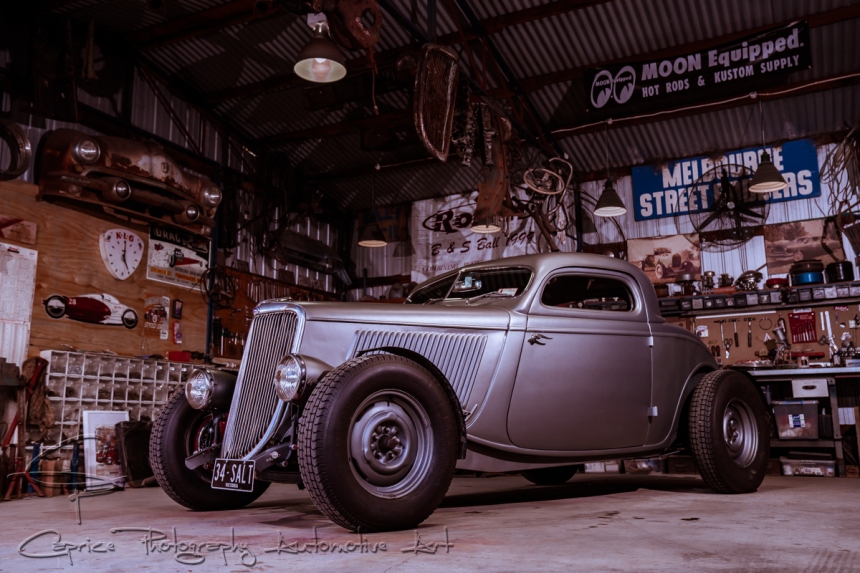 The fibreglass body itself came from the factory with a hefty 3 inch chop but Doug opted to knock another inch and a half out of the pillars just for that uber cool look! A louvered steel bonnet sits behind another swap meet item that had seen better days and required Doug’s ingenuity before taking pride of place. “I bought the grill off a guy who asked what we were going to do with it in that condition. A good mate of mine, Leigh Priggen who’ve I been building hot rods with for a lot of years helped me make a jig to go in the vice and then we used various tools to straighten all the bars and did a bit of welding and left a battle scar on the side and put a coat of clear over it and done. It took us about an afternoon and half a dozen beers. The bars looked straighter as the afternoon wore on till the next day when I had a closer look! It was all good though as we didn’t want the bars mint, we just wanted it to look like a good ol grill.” 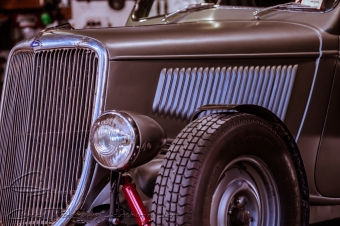 The elongated headlights are another item on the car that suits the style of the ride yet their origins remain a mystery. “I’ve got no idea what they’re off. I’ve got a feeling they’re off a Buick or some English car. I found them at a swap meet and I liked the shape of them. I’ve had them for about five or six years knowing I was going to build another car one day that I could use them on.”

Down back, the aluminium over fibreglass boot sports 133 round edge louvers in an 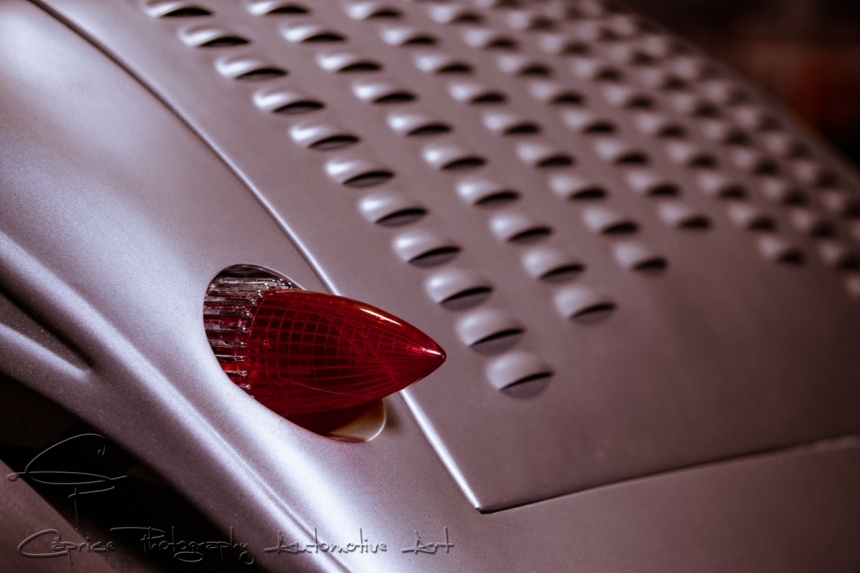 artistic arc while rocket style 59 Caddy taillights poke out of their frenched housings. “Kenny’s done a couple of those for me. My first A model roadster had those in them and then my 32. Both were flat heads also. I thought I’ve got to go with them again as everyone knows me as split windscreen and Cadillac taillights.”

Another stray from the norm that Doug has opted for is the position of the fuel tank preferring to see it in its original position rather than the traditional relocation to under the boot and replaced with a roll pan. This gives the 34 a more genuine factory look along with the extruding door hinges.

Rocket’s ingenuity shines through once again with the addition of chrome motor bike pipes extruding from under the tank. Internal modifications were required to let the flathead “Breathe”! Doug explains further. “Flatheads aren’t super loud and when I first put the tail pipes on I thought they’re too quiet and it doesn’t sound right. I made a hole saw with a couple bearings on the outside and drilled the guts out of the baffles.” 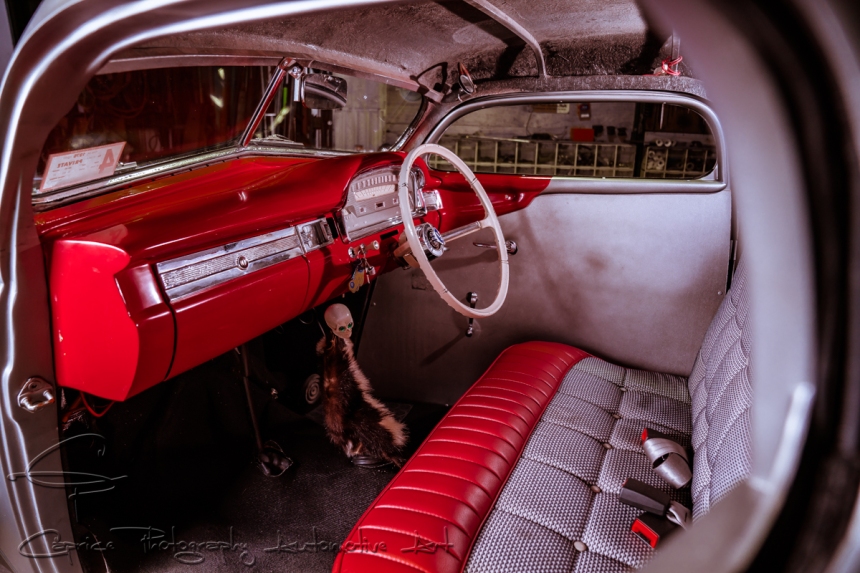 Poking your head through the suicide doors into the bare bones interior, your eyes are instantly transfixed on the moulded wrap-around dash flowing into the doors giving the sparse cabin that cockpit feel. Lifted from a Tank Fairlane, Doug had ten inches removed from the center before hitting it with red paint and fitting it into the cosy interior. The only fur you’ll find in here is the dead skunk hanging around the shifter! Mark Swallow takes care of all Doug’s interiors and knows what the man likes! “Years ago he did one of my cars and it was channelled so much he said I’ll just tuck n roll your jeans instead. He knows what I’m like. This time he said to me you need something different for this car, leave it to me. I said righto! He told me his ideas and I said close enough, do what you want. I’m rapped with the results.” The Tank Fairlane gauge cluster and a glide bench seat with a splash of red vinyl completes the simplistic theme. Interior door handles are unknown swap meet items keeping company with 1934 winders. Mark Mayle took care of all electric work as well as sorting out the correct ampage for the revamped gauges. 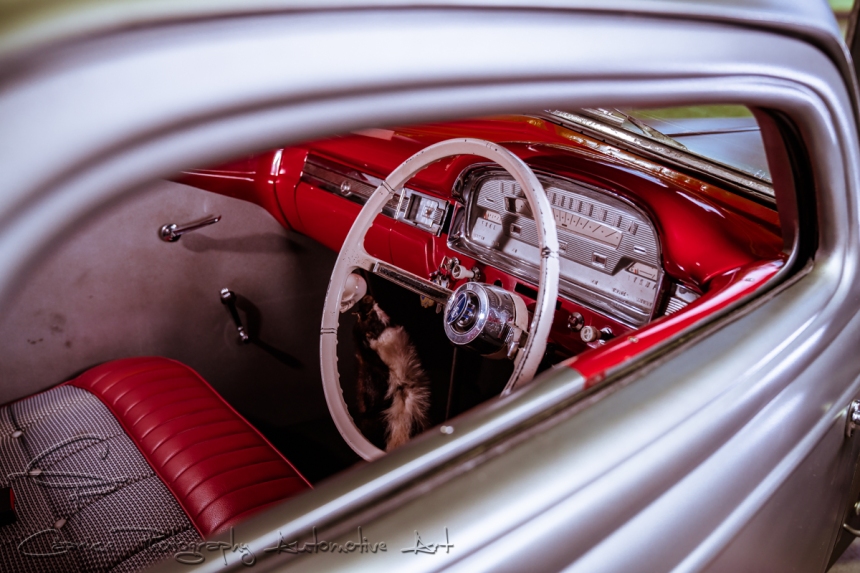 With this salt flat racing inspired machine taking seven years to build, five of those years spent in hiatus and his good mate, Shane’s 60th the inspiration to get it finished, is this one a keeper? “All my mates ask if I’m going to keep this one and I say of course!” Doug laughs. “But yeah, I think it will be. I’ve got a few other projects on the go.” Projects on the go! The automotive blood runs in the family! One daughter has an XR coupe which will soon have a Windsor put in. Another daughter has an XP ute with a Windsor just dropped in. Doug’s son is building an A model Roadster pickup running a 6 cylinder Dodge flathead and Doug’s wife, Cath has her own Galaxie convertible but isn’t shy about getting behind the wheel of his rod either but no complaints from Doug! “It’s good, it keeps it in the family and keeps us doing stuff together.” It’s also a fantastic way of passing on those countless years of knowledge and skills developed from pursuing his favourite past time! 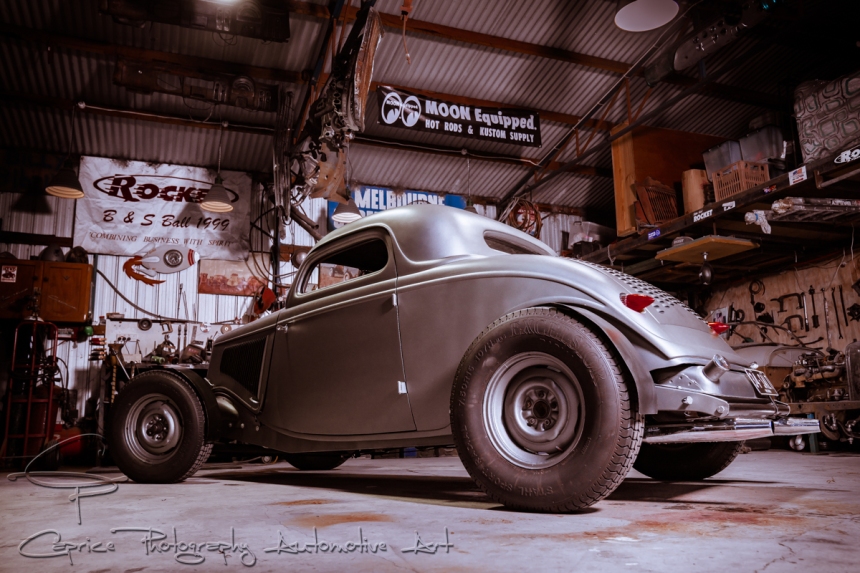