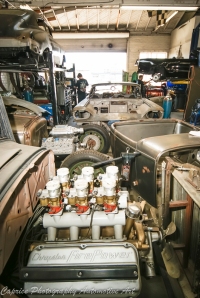 After a recent trip to America, one of our stops was to the well known custom car and rod shop of Troy Lad’s, Hollywood Hot rods located in Burbank, California. Surrounded by palm trees and flanked on one side by one of LA’s major freeways, this moderately sized custom shop takes you back to a time when small auto businesses like Dean Jeffries and Ed Roth’s custom shops could be found spread among the back streets and industrial zones of Southern California. California had built itself a strong reputation as the ultimate place where cool custom cars and radical rods were breeding in numbers. The long dry summers drew them (American rodders) to the West Coast while the milk shake diners and rod shows kept them here. Customizers drew inspiration off one another as the custom mods and crazy paint schemes was only limited to one’s imagination! END_OF_DOCUMENT_TOKEN_TO_BE_REPLACED

Looking around this old brick premises, we could see numerous other projects on the go through their various stages. Curiosity got the better of us and we ventured inside. END_OF_DOCUMENT_TOKEN_TO_BE_REPLACED