After a recent trip to America, one of our stops was to the well known custom car and rod shop of Troy Lad’s, Hollywood Hot rods located in Burbank, California. Surrounded by palm trees and flanked on one side by one of LA’s major freeways, this moderately sized custom shop takes you back to a time when small auto businesses like Dean Jeffries and Ed Roth’s custom shops could be found spread among the back streets and industrial zones of Southern California. California had built itself a strong reputation as the ultimate place where cool custom cars and radical rods were breeding in numbers. The long dry summers drew them (American rodders) to the West Coast while the milk shake diners and rod shows kept them here. Customizers drew inspiration off one another as the custom mods and crazy paint schemes was only limited to one’s imagination! 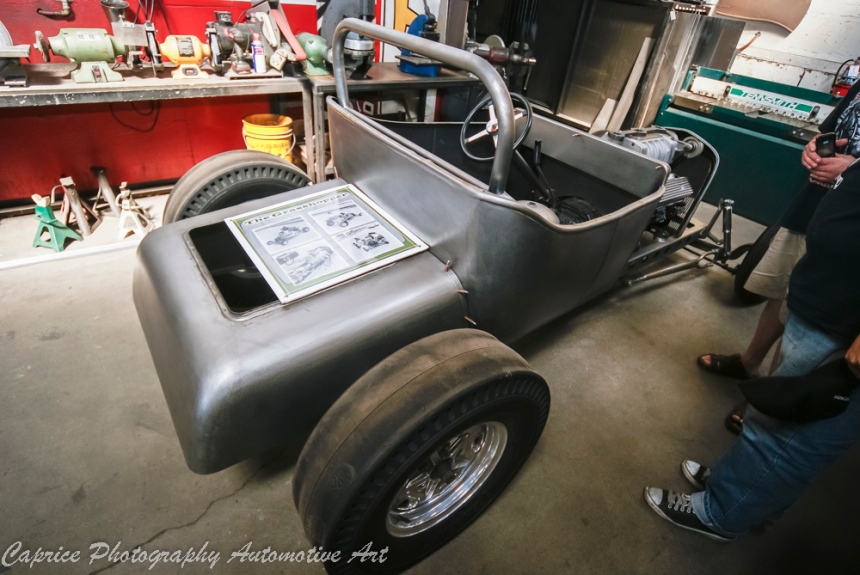 Troy and his assistant, Jim Aus, welcomed us into their busy premises and took us on a tour of their current projects. A Thunderbird in bare metal with various sublte custom mods sits next to a hoist holding up a partly primered and smoothed Chevy Fleetliner with deep dish stockies awaits its next step. A modern Mustang was taking precedent over other projects as it was to be debut at SEMA as part of their display. Another bare metal rod in their shop is being built as a tribute to a sixties icon rod known as Grasshopper. This T’bucket won many awards back in its day and is currently being built for a customer. Next to this is their Ridler Award car which will debut at the Detroit Autorama where the best of the best vie for top custom car honors known as the Ridler Award. It’s a real credit to Troy and his team when you see this car in its bare metal stage, taking in all the custom work that has been put into it! Most of this will be lost on those viewing it at the Autorama unless one knows what the car looks like in its stock form. It’s a shame but yet that’s what customizing is all about, making the mods blend in so well that it looks like it should always have been built that way! You won’t find any photos of it here as we were asked not to photograph it and we honored their request out of respect for them even letting us see it! Watch the Autorama site and you’ll soon see it! 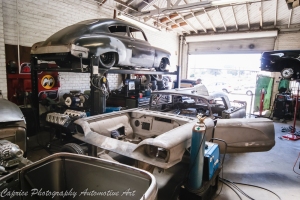 Out back, there are some cool rides, either waiting to be started or completed. A cool 32 Ford 3 window sits in the weeds looking like it was first built in the sixties right down to the old mags while a cool 1961 Caddy with a wild chop chills next to it! Well not anymore as it’s now sitting in my garage! Score!! Incidentally, you can read all about it here: The Project . Another rolling chassis representing something from the 1940s awaits its turn in front what should be a cool highboy when finished! A Mercury with a chop top sits in the driveway, perhaps waiting for a stack of frenching, smoothing and pancaking! Down back is someone’s Beelte, modified of course as it seems no car leaves the premises untouched! Why wouldn’t you!

So, if you’re in LA and are looking for a cool custom shop to check out owned by a great bunch of blokes, stop in and check out Troy and Jim at Hollywood Hot rods! I guarantee they’ll have plenty of old s’cool coll ride on the go! You never know, you might walk out of there with a souvenir like I did! 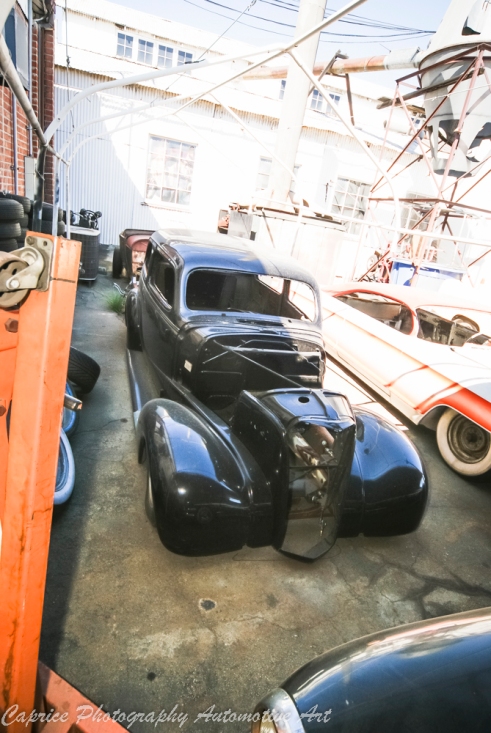