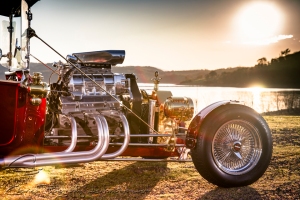 Old drag racers never die, they just reminisce. They don’t just reminisce while rocking back and forwards in a rocking chair on the front porch, they reminisce by recreating the highlights of their drag racing youth generally in the form of a street version of their former glory racers. 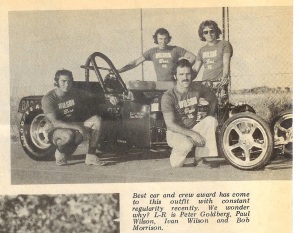 This is exactly what this hot rodder has done. Ivan, a retired fitter and turner, used to drag race in the seventies with his brother Paull in a Holden six cylinder powered T bucket. The candy apple red altered was a national record holder in its class under the campaigning skills of the “ Wilson Bros.” The whereabouts of it now is a mystery and looks to remain so.
Time waits for no man and life surges on as family and careers take over as it did with Ivan. Still into racing, the Wilsons, now a father and daughter team took to go-karting till they outgrew the scene in 2006.
With time up his sleeve and fond memories of his youth as well as a fondness for the T buckets, Ivan decided now was the time to build the rod he’d always pictured in his mind, based on their early drag racing days.
Purchasing a rolling chassis and fibreglass tub from Mc Donald Bros Racing, Ivan kick-started his project. Based on a 1923 model T, the vintage style rod was to be a combination of both traditional styling with his own custom touches. McDonald Bros Racing has been a great source of information and help throughout the build. 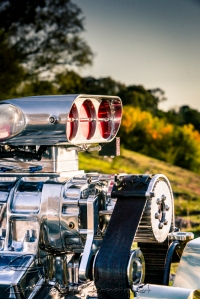 There’s no hiding that towering motor based on an all alloy 350 Chev which Ivan sourced from his brother at  Racer Pro. Ivan’s brother Paull, also manufactures  high performance alloy SB Chevy heads, so it was only natural that a set of sibling  23 deg alloy heads were bolted into place. A forged steel Scat crank and rods, Forged blower pistons, mild Crow   cam and Shaft roller rockers give ample strength to handle the down force from the 6/71 Weiand blower and 750 double pump Holley. Wait, you thought it was injected? Ivan has deceived you with one of his custom touches as the carby is hidden inside the specially designed bug catcher sourced from New Zealand and fake steel lines gives the impression of fuel injection. Very clever and well executed! Those wild extractors certainly top off the exaggerated look.
A tricked up T350 with 2,500 stall transfer the horsepower to the 1986 model Jag rear end running 3.51 : 1 gears  via a very short 300mm tail shaft. A quick change diff cover from     Mc Donald Bros Racing tops off the view from the rear.
While four coil over shockers control the rear end, the front end travel is alleviated by a suicide single elliptic leaf spring mounted behind the tube drop axle and held in place by a  4 bar set up. Disc brakes all round actuated by the Gemini booster/ XB master cylinder handle all the stopping duties.

The 6 x 15 front rims running 165R15 Nankang tyres and 10 X 15 rears with P285/70B15 BF Goodrich radial are custom made wire wheels from Elite Wheels. The knock offs on the rear are dress only while the fronts are genuinely holding the wheels on and all four spinners have been emblazoned with the rod’s name, Amber T. Just another one of Ivan’s custom touches he has created or had made for him. The T theme continues throughout the vehicle including the matching steering wheel horn button and various T shaped brackets on the front suspension and windshield posts. 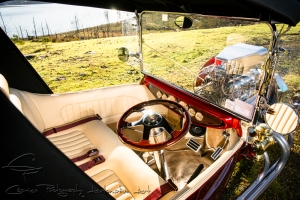 Much of the brass work was purchased overseas while Norm from Aussie Dessert Coolers built the widened radiator to keep the overall proportions aesthetically pleasing to the eye. Norm also formed up the fuel tank atop the bed while Ivan utilised his years of metal work skills to customise the remainder of the brass work.
Not just handy with the hammer and welder, Ivan put his timber skills to work by cutting and sanding into shape much of the timber work you see adorning the early rod including the timber bed on the rear, the seat frame and door inserts as well as the dash panel. Complementing the shapely dash are a full set of TPI gauges and LED warning/ indicator lights. The ignition, switches and stereo has been tucked away under the seat in the base. The smooth creamy leather interior was stitched up by Red Label Interiors and a Lokar shifter, homemade column and Autotecnica wheel complete the simplistic two seater.

The soft top roof is a work of art in itself. Framed up with stainless steel tube, the structure is covered both outside and inside for comfort and durability and Ivan can vouch for the craftmanship from  Classic & Sports Auto Interiors, as there is no flapping or warping when under duress.
When it came to colour choice, there was only ever going to be one colour and that’s Candy Apple red, the same colour their altered was painted in and to really bring the nostalgia to the next level, he even had the original altered painter Ray Miles paint the T bucket! Yep, the guys had all stayed in contact throughout the years!
The ghost flames came about after Ivan went to inspect the paint job on the chassis. “Go and have a look at what we did” Ray pointed out as Ivan went to inspect. When he saw the ghost flames on the chassis rails, he was stoked as he exclaimed “wow! They look great” and decided to continue the flames onto the body. A big thank you to Ray and Steve Wilson for the flame design. 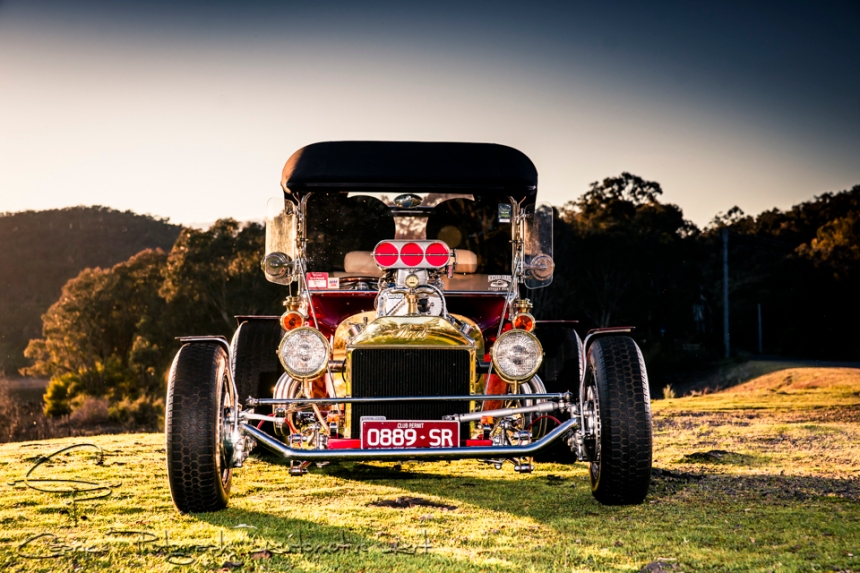 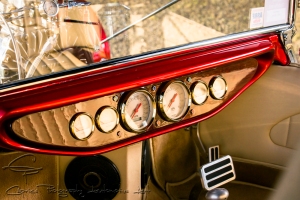 The T was legally registered days before the 2010 Victorian Hot Rod Show where it was first debuted and took out its first of five Top street rod  Bucket class awards. Subsequent showings at this coveted event saw it pick up the rest! “It was never meant to be a showcar” remarks Ivan, “it just turned out that way!” For a homebuilt hotrod, that’s a feather in anyone’s cap!

Where to from here? Well, the bucket is up for sale as Ivan says “I’m not getting any younger and the T’s not ideal for the long runs. About an hour on the road and the exhaust noise droning in your ear is about all I can handle these days. It’s also a bit chilly during winter so we’re looking for something a little more closed in.

Maybe a coupe or a Tudor perhaps. My daughter Kate and son-in-law, Carlo  have a 34  Chev Tudor and I like that style.” Ivan’s wife, Sue is his biggest supporter with the T but I think she’ll happily support his changing preferences for a warmer, quieter ride! Mind you, it’ll still be completed to the same high standard as you see here! 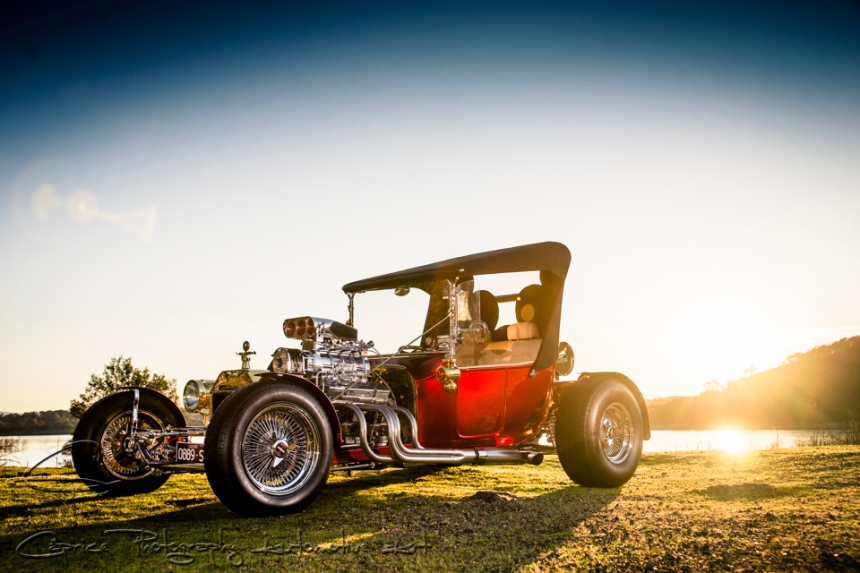 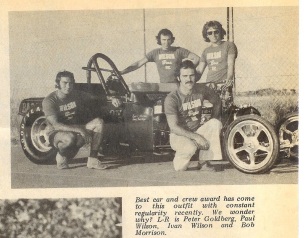 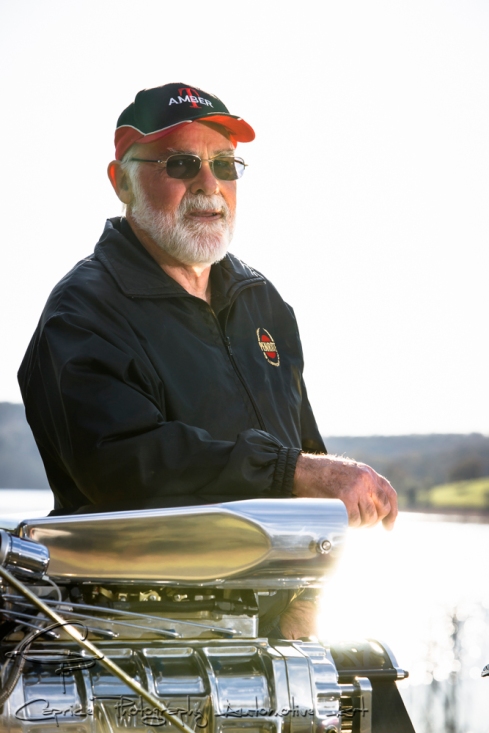 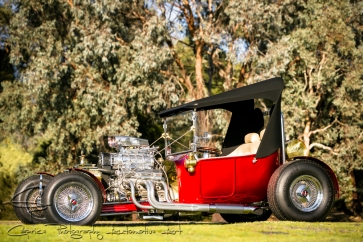 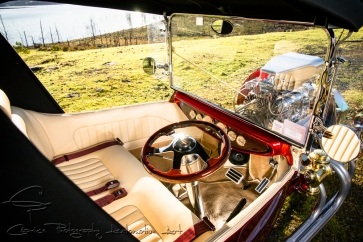 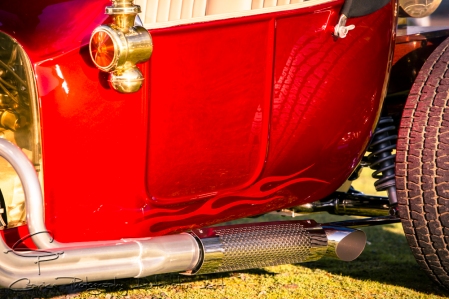 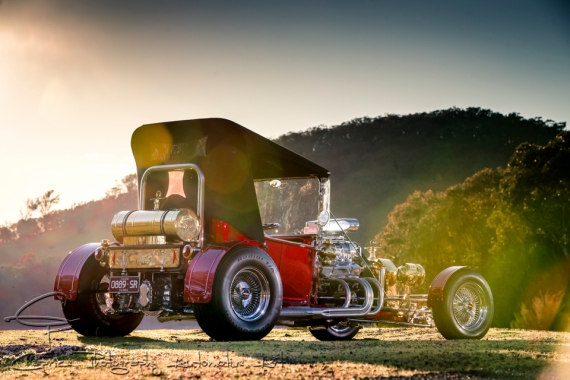