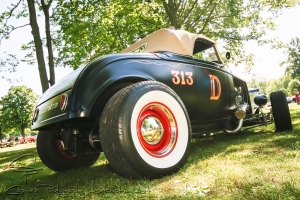 This cool classic 1932 Ford highboy is known as the D-Rod. Custom built for the Detroit Metro Convention & Visitors Bureau in 2006, it combines America’s most popular pre-war body style with America’s most revered V8, The Chrysler 392 Hemi. This is no ordinary Hemi and is one of only six hand built pre-production versions of the mighty Mopar 6.4 litre producing over 525 hp @ 510 ftlb donated to the project by the Chrysler Group LLC. It was built to showcase the best of the old and the new from Detroit’s auto industry.

With an impressive launch stat of 0-60 mph in 3.9 seconds and a 12 second quarter at 121 mph on radials and capped headers, this roadster is no slouch on the strip while definitely holding its own in the looks department when cruising the boulevard.

Appearing at the North American International Auto Show, the Autorama in Detroit and the NSRA and Goodguys PPG Nationals, its debut coincided with the 75th anniversary of the 1932 Ford and the 50th anniversary of Chrysler’s original 392 Hemi.  With regular appearances at such events as the AUTOPALOOZA and Woodward Dream cruise, it has also taken pride of place on the parade laps prior to a NASCAR race at Michigan Speedway.

As far as good will ambassadors go, you can’t get much cooler than this and it has certainly left a positive impression on all those whose path it has crossed.