There’s something about a blown ’55 Chev that always grabs your attention! It’s as though the curved design of the bonnet and guards were made to have an injector hat or hilborn scoop protruding out the center of them. Maybe it’s the simplicity of the grill, single headlights and indicators that lend themselves perfectly to it as well. Take a look at Paul Mamos’ 1955 2 door post before you and you’d have to agree it looks as though they should have built like this back in their heyday! But as we all know, General Motors didn’t option them to this standard and it is left up to us motoring enthusiasts to complete the task.

Paul has always been a fan of the 55 model and, having had a number of them in his ownership previously, it was only natural that this one would grab his attention when crossing his path. It first caught Paul’s eye as a show car in its own right back in the eighties.  With eighties styling of loud graphics and colour coded bumpers, the attention to detail was there and Paul knew he had to have it. Having turned up for sale two years earlier but to his demise he missed his chance, Paul by fortuitous luck came across the owner at a later date and kept in contact with constant pestering until the owner relented and parted with it.

Although his initial instinct was the change the look to his tastes immediately, Paul knew to be patient, plan it out and thus cruised around in its current guise for around twelve months before tear-down time came. While the initial plan wasn’t to be a complete resto, we all know what happens and it’s exactly what Paul found himself doing. Having pulled it apart and stripped off the eighties paint job, he was looking at a good quality body giving him a sound start to his plans.

Starting with the heart of this shoebox Chev, Paul opted for a 454 ci engine with injection. Not one to let a good deal pass him by, a man turned up with a special on blowers and so it was decided to give the injection the flick and blow the beast with an 871 Weiand and we thank him for that! The internals of this cast iron muscle read like a who’s who of the performance world, from JE pistons, Scat crank and Eagle rods to Dart heads and twin 750 cfm Holleys. Complementing the 790 hp donk is a Turbo 400 trans with stage 2 shift kit and 3 grand stall converter. A three and a half inch custom tail shaft drives the power to the toughened 3.7:1 ratio Detroit locker and Moser billet axles. Custom extractors and twin three inch Manglo flow pipes lets you know he’s coming while exiting the spent gases.

Stopping power has been beefed up from the old shoes to massive 6 piston front callipers on 350mm disc and 4 piston rears on the same diameter discs. Koni adjustable shocks all round keep the ride smooth while Caltrac rear bars accompany the rear.

Having sorted out the stop and go side of the equation to his liking on the big girl, Paul set about creating the visual appearance he was after and started with his own designed interior. The idea of keeping it basically original but adding subtle additions was the plan and has worked well. With gear selection now coming from a B&M shifter and extra Autometer gauges mounted neatly on the dash to keep an eye on the vitals, Paul steers her down the road using a Billet Specialties wheel covered in custom off white leather. This material has also been used extensively throughout the rest of the interior including the boot. 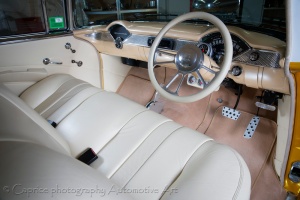 With a luscious interior  and a highly detailed blown big block poking through the bonnet, one needs to make sure that they get the exterior right to match and I’d say Paul has nailed this one! Paul had all bumpers and other exterior parts re-chromed back to their former glory but refined the look by leaving off subtle bits and pieces to give it a smoother appearance. He then handed it over to Mordialloc Body Works who laid on the pearl white over yellow candy wash. To complete the exterior look, 17 inch Billet Virtec Specialties shod in 205s were bolted on up front with large 295s stuffed under the rear arches. 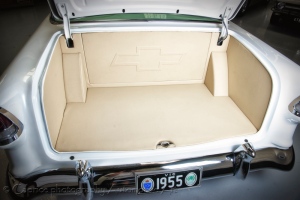 The crowning glory on this beautiful piece of American automotive art would have to be the bicentennial number plates which Paul has had in his possession for some time and compliment it perfectly! With the Chev now finished, I asked Paul what part he enjoyed the most and he stated it was having his son grow up around the build. “He loves the car” declared Paul “and says it’s his 55”. With his son now eight, Paul has plans of restoring another 55 Chev in the future with him. Until then, this 1955 150 model should see some good miles added to its odometer.  As this is not the only piece of automotive history in the stable,  Paul, along with his brother Jim have a large collection of vehicles but I know which one I’d be cruising in at go time! 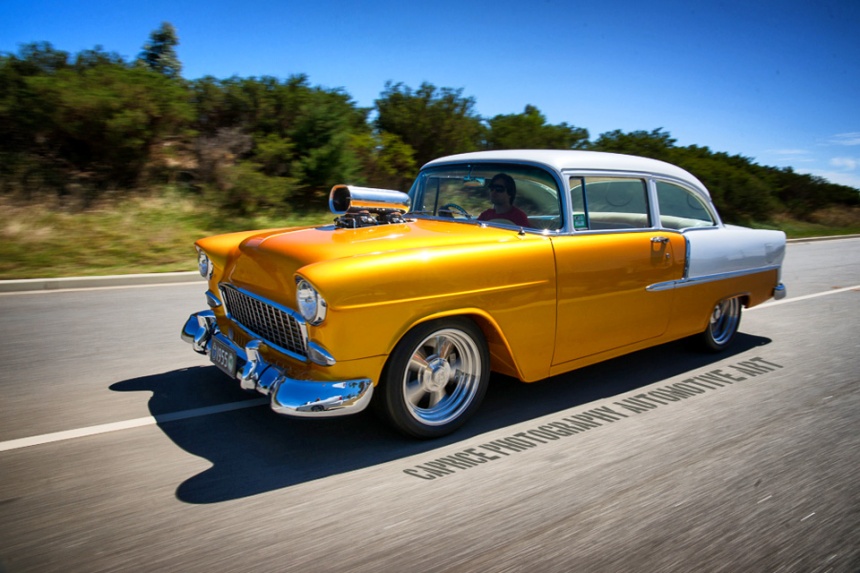