Whilst many of the stories you’ll read throughout the vast library of issues of Cruzin magazine talk of the distances travelled of various American imports or of the far reaching extent owners have gone to purchase parts to finish their rods and customs, this story relates to a 61 year old classic that has spent it’s entire life close to its original birth place!

Hoppers Crossing local, Terry Bryant was attending the Geelong All Ford Day at Deacon University in 2002 when he came across a white 1956 Customline sporting a set of Globe mags. She was a nice clean example of the American mid-range model and had been built as a right hand drive from the Geelong Ford factory just up the road. “A good mate of mine has a 53 Customline with a big block in it and I always liked his style so I kept an eye out for one” explains Terry. “A lot people chase the 57 Chevs but I don’t mind the Customlines. I saw it at the show and it had a for sale sign on it so I took an interest in it”. The previous owner hailed from Bacchus Marsh, just an hour up the highway and a price was agreed upon for Terry’s venture into the modified car world. 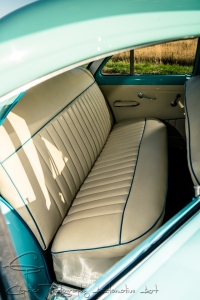 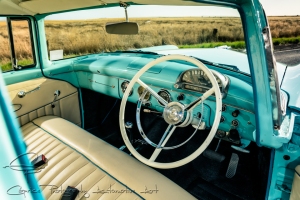 After spending some time behind the wheel of the 351 powered, 4 speed manual shifted four door, it was decided time to give the old girl a freshen up with a new motor and a shift to auto for Terry’s wife if she were to be inclined to do some classic cruising. It was during this cruising hiatus that Cindy said the words many of us long to hear but only live in hope! “My wife, Cindy said why don’t we repaint it and spend a bit more money on it so that gave me the green light!” Such an understanding and trusting wife to give the go ahead to such an open ended venture!

Terry’s long time school mate, Paul Munster is a qualified wiz with the welder and set about tidying up any imperfections and unwanted holes while adding enhancements to the exceptionally straight body. The only rust to be found was in the bottom of both front guards thanks to a pair of small rocks lodged in between the guard and inner panels. The original front seat belt mount bolts that run from outside the B pillar through to the seatbelt brackets were relocated to inside the pillar for aesthetics.

Another good mate of Terry’s, Jamie Casha laid on the coats of period correct teal to keep with the fifties era yet the colour was decided upon from paint cards by Terry and Cindy from a 1995 Nissan. “We toyed with the idea of keeping a white roof but once we saw the colour painted on a few pieces of the car we decided to go the full hog and cover the lot.”

Whilst this white walled classic might look like a sleepy cruiser, what’s lurking under the bonnet is enough to put the wind up any boy racer in his poser mobile! A 565 hp 393 ci Cleveland V8 sporting alloy heads from AFD, roller rockers, an Airgap manifold topped with a 750 Holley double pumper and ICE ignition gets this heavy metal hauler moving thanks to Lakeside Automotive. She might be a thirsty motor but Terry’s not concerned! “At the end of the day, when I had this motor built, I wasn’t going to worry about the fuel. I built the car so it looks great, goes great and sounds great!”

A C10 auto with 3’500 stall sends the multitude of horsepower down to the 3.55:1 ratio nine inch diff with 31 spline axles before torturing the tires! The rumble and roar comes courtesy of a set of extractors built by Bellerine Exhaust and a twin three inch system exiting just past the diff bent into shape by Allen at Blitz Custom Exhaust in Werribee. 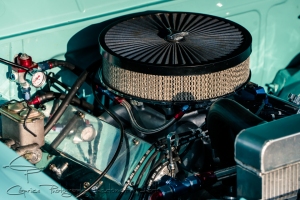 That cool cruising stance was set up by Hodgeys Hot Rods & Customs while the braking system received an overhaul and upgrade with parts from Hoppers Stoppers. Cooling duties is sorted by a large alloy radiator and fixed thermo fan thanks to Norm at Aussie Desert Coolers while Terry’s mate, James Treadway spent three months rewiring the big machine.

The change of exterior colour called for a new interior to suit. While the previous interior was in perfect condition, the burgundy colour just wasn’t going to cut it with the light greeny-blue hue! Local upholsterer, Brett Tucker from Tuckers Auto Marine was responsible for choosing a suitable colour with contrasting piping vinyl for the three wide bench seats. Retractable seat belts were inserted for aesthetics and safety while a Vintage Air heater filled up space under the dash. “Originally I had a round style one where you opened the flaps from the front. Then you pull a knob down to open the vents but it started to make a bit of a racket and didn’t smell the best.  So we replaced it with a Vintage Air unit. It’s probably the worst thing I ever did to the car, I should have put an air conditioner in it, not a heater as we get plenty of heat from the motor! We put sound deadener down but it still comes through.” 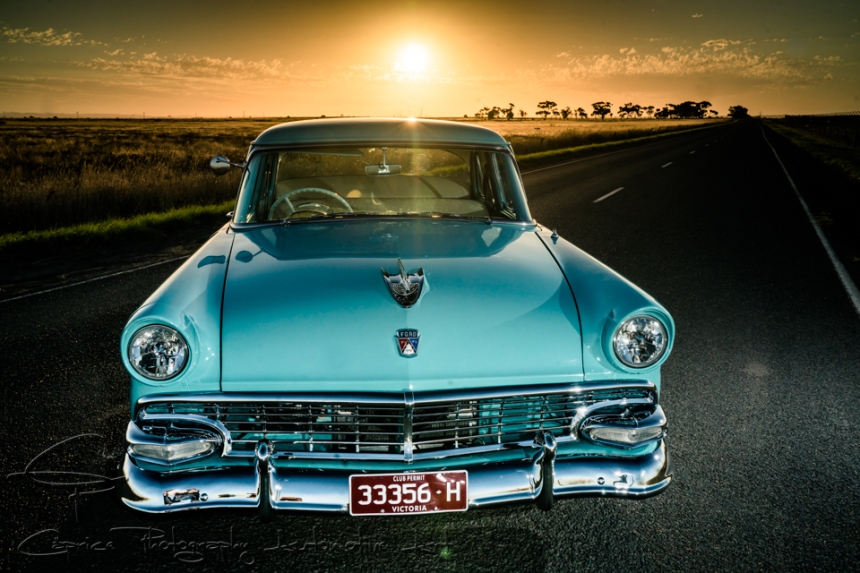 The original dash layout has been retained except for the addition of a tacho into one of the three round gauge mounts located on the dash. Terry has kept the uber-cool dial radio in place for prosperity but opted to remove the defunct and cumbersome internals for space saving reasons. A Quick Silver shifter is one of the few necessary aftermarket pieces seen in the classic interior.

Terry’s son, Christopher has played a big part in the overall project when it came to appearance. “Its mine but my son, Christopher looks after it. We’ve got the (ex 2007 ASRF raffle) 36 roadster and I’m now building a 34 3 window coupe. He’s the one who decided on the wheels and to drop it on its guts. That’s the way he wanted to go on it so I said you’re now looking after it. Now we go halvies in it but deep down it’s still my car” Terry smiles.

As his first venture into our modified car community, Terry has found the scene very welcoming and a wealth of information. “Deep down I’ve always wanted a hot rod. It’s just a matter of getting your funds right and your time right. We work hard and things have worked out well for us. “

“Everyone in the scene is friendly and they want to chat about your car. It’s always great to chat to people and get ideas off them. There’s always plenty of car shows on around Victoria”. Welcome to the fold Terry and look forward to seeing this tough cruising classic around the traps!

If you want to stay up to date with all automotive events on in Victoria and don’t have time to scroll through the various sites listing the events, I make it easy for you by gathering all the events and sending them to you via email and it’s completely FREE! No spaming, no advertising and your email address is kept private! Simply follow this link! What’s on in Victoria