Ford Australia never made a GT ute throughout the twentieth century, the best you could hope for was a stock V8 ute optioned up to GS specs. FoMoCo once considered a sporty ute called a Surferoo in 1969, built one out of interest and to test the waters of the youth market but that’s as far as it got. It was left up to individual owners to build their own GT workhorses and Bob’s maroon classic is one such vehicle that copped the treatment. 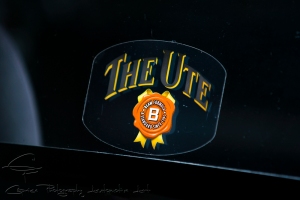 Bob will tell you straight away he’s not responsible for this build but is lucky enough to be the recipient of someone else’s idealism. The car was originally built by the previous owner around 1992 to a high standard before succumbing to ill health. Bob simply found himself in the right place at the right time to get his hands on this 1967 Ford utility V8 rumbler. As a sales rep, Bob does a fair bit of travelling covering much ground in this great land of ours including the apple isle. While down there on a business trip, a customer asked him if he’d be interested in a hotted up XR ute to which he had Bob’s undivided attention. After receiving all the necessary info, Bob was onto it in a flash laying down the coin before jumping in and hitting the bitumen headed for Devonport where a good mate and local mechanic  gave it the once over. After receiving the thumbs up, Bob hopped on a north bound watercraft with his new found love and headed for the main land, hence, home.

Once back in his garage, it was time to check out the finer details of this GT utility conception. The original owner kept to a mainstream muscle car image when modifying the squared up classic. The body mods are subtle and needs a keen eye to pick them up. Twin Celica fuel caps under each C pillar blend in nicely leading to twin Falcon ute fuel tanks giving Bob about eighty litres of go juice if required. Next comes those classic gold Simmons B45 rims setting off the highly polished maroon paint complimented with BMW gold fleck stripes.  Encompassing these nineteen nineties classic rims are 215/60/15 inch front rubber while maximum 295/50/15 BF Goodrich fill the rear. No guards were pumped during the making of this beast, only lips were rolled! The only other noticeable mods are the GT mirrors and the frenched aerial on the rear quarter mounted by Bob himself. I quizzed him where it came from. “I’m not gonna tell you it’s off a VC Commodore” laughs the die-hard Ford fanatic! 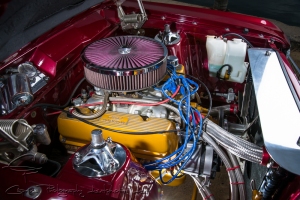 More of the GT plan comes to light when you poke your head under the bonnet and discover what motivates this mean machine. Nestled between the strut towers is a worked 351 c.i Cleveland running 4V heads and a 600 Holly carby. A four speed top load gearbox has Bob shifting gears like a true muscle car while the traditional nine inch LSD diff out back ensures the power hits the bitumen without fuss. The only modification Bob decided to do to the driveline was to replace the heavy duty clutch with a more road friendly version allowing for smoother changes. Initially, the spent gasses exited via a single system but Bob prefers the genuine GT twin system he’s had it converted to.

Stopping power comes courtesy of a VH40 power booster exercising XC ventilated discs all round ensuring there’s no problem pulling the real steel beast up when required while ride height was dropped to a more visually pleasing two inches lower than standard with Munroe gas shocks absorbing the bounce. All Bob did was level out the old school rake by dropping the rear via reset leaf springs. All in all, Bob’s stoked with the setup stating “If the need was, hey tomorrow we’re going to the Summernats, no hesitation, it’s a very reliable car.” 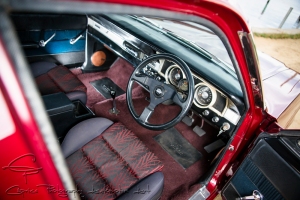 The original late sixties black vinyl interior has been kept basically stock with minimal upgrades for creature comforts as required. A Momo steering wheel has replaced the previous hard plastic item while a late model stereo for cruising tunes adorns the steel dash. A small tacho on the column helps Bob keep an eye on revs while man handling the factory stick poking through the cut-pile GT carpeting. Custom door trims visually enhance the utility cockpit complimenting the late model XR8 bucket seats which Bob sourced from a swapmeet giving him and his passenger greater lumber support for those long drives. Under the tarp is the battery, piece-of-mind fire exstinguisher and a set of chrome tie rails normally located on the outside. By mounting them on the inside, he gives himself the best of both worlds; clean lines outside with practicality on the inside. All weather matting completes the finish in the tub.

“So, is it a keeper” I asked Bob?  “Everything’s for sale. To be quite honest, I’ve got my grandson coming up now and granddaughter and it’s only a two seater so if I had a sedan based car it’d be easier. The right person, the right deal, the right money, I would sell it to step into a four seater type vehicle”

“I’m going back to the States in May and I’m going by myself so who knows what may or may not eventuate” Bob quips laughing.

Bob’s stable also consists of an 80,000 original mile XK four sedan one owner owned by Bob’s Auntie which wasn’t driven for 17 years and an XP two door Falcon coupe running 302 Winsor with C4 auto currently being styled as an old school cruiser with satin black paint. “Probably, realistically, I’ve got one car too many” declares Bob. I’ve never heard such language from a car enthusiast and I think fellow club members from the Real Steel custom car and bike club would agree!!