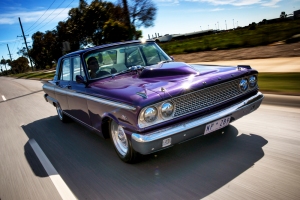 Muscle cars are as popular today as when they were first conceived. The rarer the purpose built machine the more car fanatics want it. That goes for Albert Pace and his Thunderbolt clone too. He spied a 1964 Fairlane Thunderbolt in a magazine one day and decided that was the car for him but with only 100 of these factory experimental drag cars produced, he knew he wasn’t going to be able to get his hands on a genuine one so the only option was to build his own. 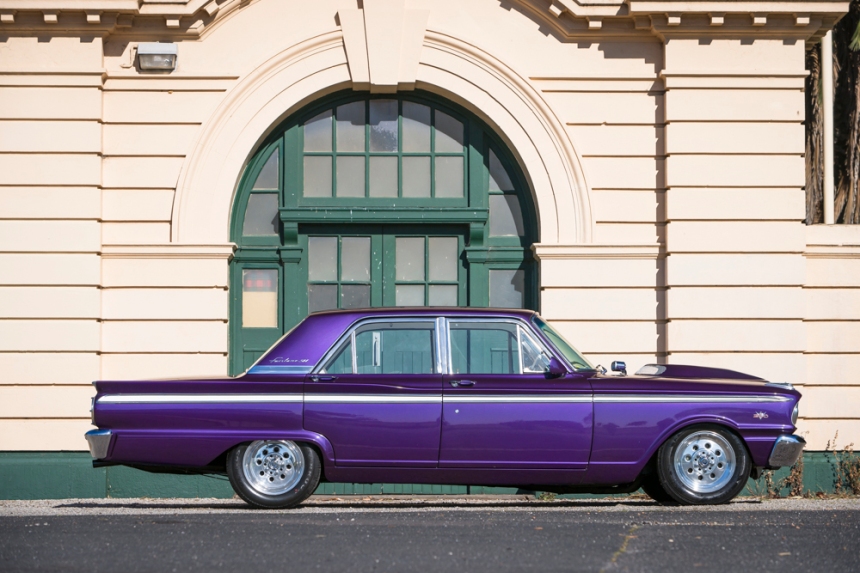 The first thing on the list was to actually locate a suitable Fairlane from which the idea was originally conceived. You see, the revved up research and development team at the Ford Motor Company decided to see what would happen if they shoehorned in the big block 427ci motor built for the much larger Galaxie in to the lighter intermediate sized Fairlane to take on the Max Wedge Mopars for racing purposes. It worked a treat but the hierarchy at FoMoCo decided it was unsafe for the general public and bolted a disclaimer in the glove box lid. Now we want it event more!

Albert located his future muscle car in Lylidale where it had been stripped down in preparation for a rebuild but this was never going to eventuate after sitting around in this guise for ten years. Once all the parts and panels were dragged back to his garage, Albert set about building his ride to his style. First on the list was to up the power plant and a 351 Cleveland was the choice of motor. Good friend Eddie Farrugia from Motorpro did the spanner work on it adding a 600+ solid lift Crane cam along with suitable headwork to the 2V heads and component strengthening. TRW pistons do the pounding helped out by 4ma rods and factory crank. Atop the Performer manifold sits a 750 double pumper Holly while spark comes courtesy of an Ice ignition system. Albert estimates the output to be in the vicinity of 380 to 400 hp and is yet to test it on the strip. For Albert, he’s happy with this setup stating “It’s always had the good rev range. It’s plenty. Most car shows these days are that packed you really don’t want it any hotter”. Fitting the 351 into the midsized engine bay wasn’t a straight forward job and required the shocker towers to be trimmed down in order to fit the extractors. From this point on, the spent gasses exit out back via a two and a quarter inch twin system. The transmission tunnel also had to be modified for the four speed Top Loader and Hurst shifter as most of these early Fairlanes came out 3 speed boxes in them. 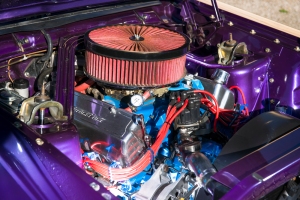 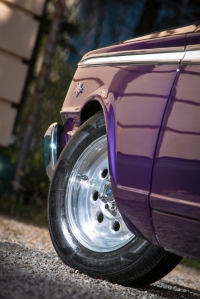 Down back is a shortened nine inch running streetable 3.7:1 gears while 10X15 Weld rims shod with 265 wide Hancook rubber neatly fit under the mini tubbed guards ensuring all that horsepower hits the tar without major breakout. Up front are 15X5 Welds with 165 wide ‘Cooks attached covering the XR Falcon brakes.

Next came the body prep with the only modification being the addition of a genuine Thunderbolt fiberglass bonnet located in Queensland, adding an imposing look to the 63 classic with that raised teardrop ram air scoop letting you know she’s no sleeper. Lock pins hold it in place for looks as well as ease of fitment. “You can lock it down but it was just too much mucking around to make it work” says Albert. Time to apply the paint and a good tough muscle car colour of purple was applied to the straightened panels by another good friend of Albert’s, Peter Robinson from Profinish Car Repairs.  With fresh chrome and stainless trim bolted on, this tribute car was really taking shape.  A pair of XY GT mirrors and he was done. 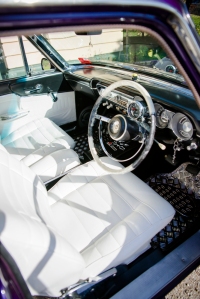 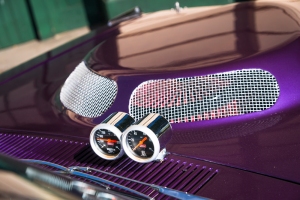 Finally came the interior and, as this was to be a family car, Albert deviated away from following the interiors of the real Thunderbolts as they were sparse to say the least in the pursuit of low tare weight. He went one step better than the original Fairlane furniture by installing an interior from a 1970s ZD Fairlane and had the whole lot covered in white vinyl by CNZ Upholstery. Black carpet and painted steel contrast the white nicely breaking up the colours. The steering  wheel got the custom touch as well with thanks to Pearlcraft and Albert’s own addition of  extra gauges to keep an eye on the vital engine stats while cruising tunes emanate from a ? stereo system.

The build took 18 months with most of the work done in-house and, for a budget cost of $14,000! It’s hard to believe you can build a muscle car clone for this price in this era but even harder to believe that this car was built 18 years ago! Maybe it’s been kept in cotton wool for all those years? No way, this 1963 four door has over 12,000 miles under its belt since this build not to mention a family growing up in it! “The family’s been in it since day one” says Albert “I’ve still got the baby bolts in it. Nick (Albert’s son) went in it basically from day one”. To look over the car as I’ve done, it has minimal wear signs on it, a true testimony to the original craftsmanship and to the meticulous maintenance and upkeep Albert has done.

The future for this well-kept ride? “We never thought of selling it” and when asked if Nick will inherit it, “it’s a bit hard because we’ve got two boys so they’ll both fight for it. When they’re older, they can both share it”. But as Nick’s still on his P plates, Albert can be safe knowing he’s got it for a little while yet. The family that plays together, stays together. 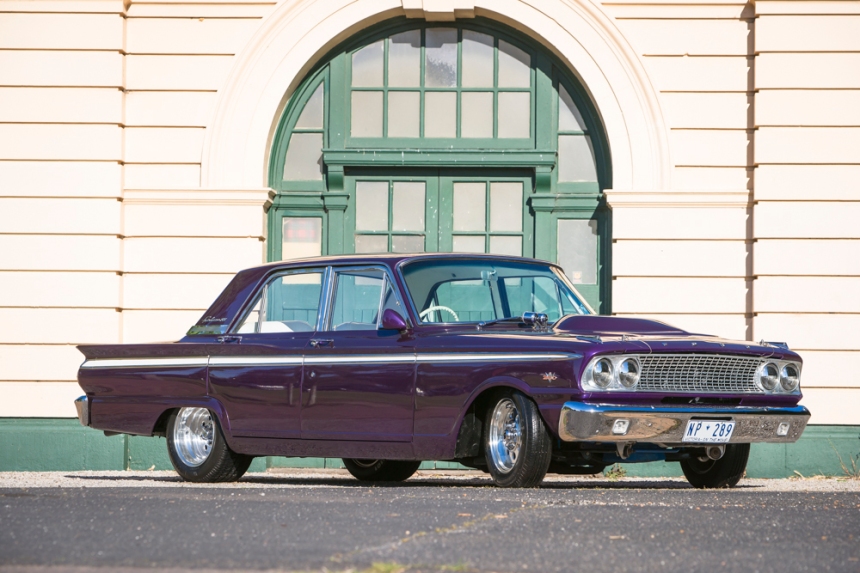