Larry Watson was one of the central figures of custom car building in LA during the 1950s. He was a trailblazer of custom paint trends, techniques and tricks. His name is synonymous with candys, pearls and metal flake along with some of the brightest paint jobs seen due to his colour mixing talents. To this day, various styles of custom paint work are still referred to as Larry Watson Scallops, Larry Watson Panel Jobs or Watson flames. His unique style is held in high esteem throughout custom car lore and can be seen adorning custom rides today. Dennis Jones’s 1959 Ford Fairlane is one such car that pays homage to this avant-garde customiser of the past. 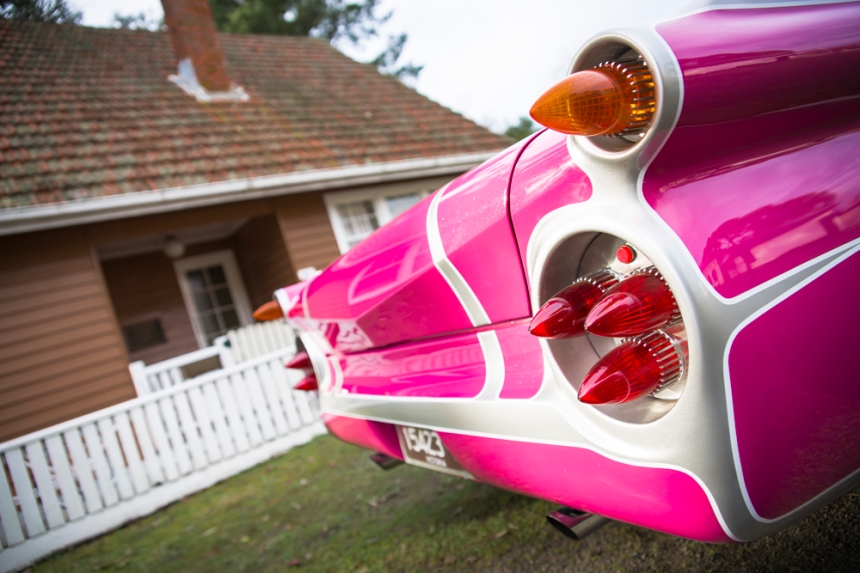 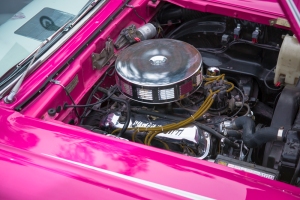 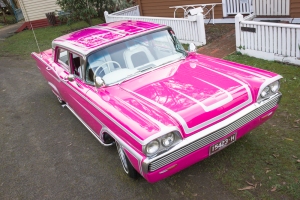 Purchased in 1979 as a neat two tone grey stocky, Dennis kept the four door sedan for a couple of years before selling it to good friend Graham Holden. Dennis then purchased himself a 1959 Galaxie Retractable for cruising duties but that Fairlane never left his mind. While in the care of Graeme, most of the custom work was completed by Russel. Once stripped down, the arduous task of modifying the tank Fairlane to a fifties theme began. It was stripped of all but the major bright work before progressing onto the panel modifications. In true fifties style, the front and rear have been roll panned and the fins have been cut back for a sleeker profile. A steel sun roof has been blended in allowing Dennis and his family to enjoy sunny cruising while Fox Craft spats were fitted to give that smooth glide look. Another great fifties custom tradition is the custom made floating bar grill complimented by dummy spot lights at the windscreen and lake pipes sweeping down the sides. Frenched taillights and indicators finish off the classic list of mods. It is at this point that Dennis takes over the build. “A couple of times I asked Graeme if he would be interested in selling it back to us. Over a period of time, (seeing Graeme’s progress), I had a vision of what it could look like finished” recalls Dennis.

He continues “Graeme rang one night and inquired about a 1965 Galaxy I had so a deal was struck. Then the dream started!” Having received the rolling custom shell, he could see the potential for a Larry Watson inspired custom ride, in particular, Larry’s own 58 Squarebird named “Vino Paisano”. The partially customised Fairlane sat in the shed for some time while Dennis worked out his plan of attack. Good customs don’t happen overnight and to get it right is to plan it right. The plan involved utilising mechanical parts from another locally built vehicle and an XB GT was decided on. Don Burton was given the task of performing the amalgamation of American custom with Aussie muscle. First came a driveline change and, while initial plans were to shoe horn in a 460ci/ C10 auto, Dennis wasn’t prepared to start cutting up a good floor. So a 302 Windsor with matching C4 auto was slotted into the hole where the original 332 ci motor and box had sat. Exhaust duties are taken care of by the factory headers running through twin pipes meeting in the middle before exiting out the rear. All taken care of by Warragul Exhausts. Next the XB GT diff and associated suspension and brakes replaced the factory items while Ford discs take care of stopping duties up front. To finish off the body mods, Dennis had a set of 1959 Cadillac taillight lenses stashed away for just such a project. The addition of the bullet shaped lenses creates the image of jet flames shooting out of the rear booster like taillight openings fitting in with the nineteen fifties obsession with aerospace travel. The unobtrusive front indicators come courtesy of a Ford Mondeo blending in perfectly. Aside from needing to source some missing trim parts, the Watson classic was taking shape as planned. 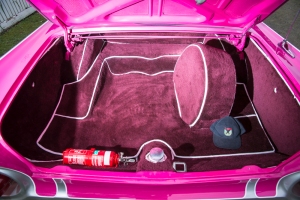 Next in line was the interior, and, since there was none to speak of, Dennis set about designing his own utilising a set of XD buckets minus headrests for the front while a classy ZB fairlane rear seat with center armrest was chosen for the rear. A custom made console houses the auto shift and extra gauges mounted under the dash gives peace of mind driving. Rob Geisler Motor Trimming from Moe was the man with the magic stitching and covered the cruising compartment in white and burgundy tuck and roll with burgundy piping. Both interior and boot are complimented in burgundy carpet highlighted with white piping. With a fresh coat of paint across the dash and some rejuvenated bright work, the interior has that show class custom finish to it. 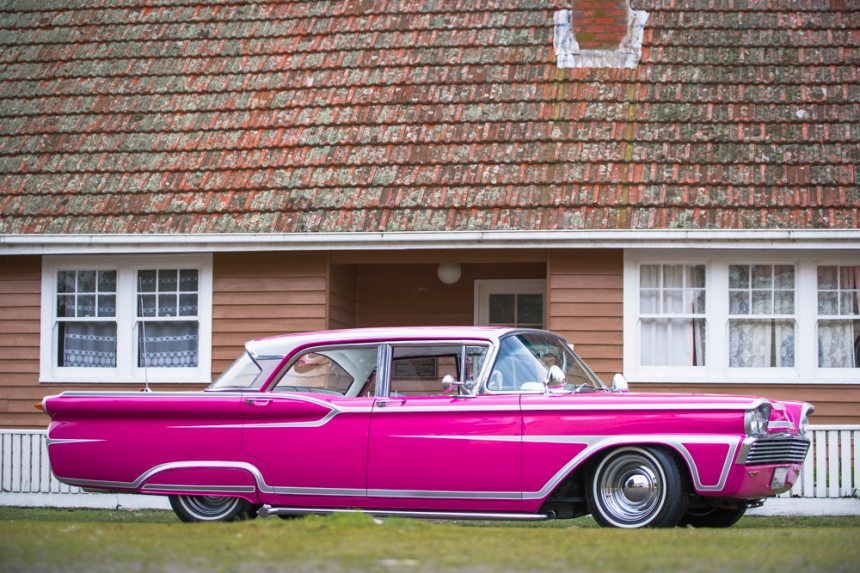 Now comes time to lay down the Larry Watson special and with help from his supporting wife, Karen-Anne, the colours were selected. Upon handing the custom Fairlane over to Leon Davies at Big L’s Chop Shop, the base colour of rich magenta was laid down. It was then covered with a white pearl before masking up the Watson scallops and laying down coats of contrasting silver to bring out the desired effect. In true fifties custom fashion, Leon created the metal flake roof with lace inserts encircled by more silver scallops. The whole job was then finished in clear creating one eye catching paint job that Mr Watson himself would be proud of!

With the 2012 Nationals set as the deadline for completing the four door custom, thanks to the many good friends Dennis has, it was finished on the Sunday before heading off on Monday to Queensland. As usual, life never runs smoothly as Dennis and Karen-Anne found out. Traveling up the Newel, a stray rock from a passing vehicle lined up their windscreen and smashed it. Locating another one while stuck in Forbes was going to be a challenge but Ralph Moore Auto Glass from Sydney came to the rescue sending one out ASAP seeing the happy cruisers back on the road and heading to the Nats within two days.

Dennis is more than happy with the Watson inspired Fairlane, aptly named Pricilla stating “the thrill of the Nationals was everytime we stopped somewhere, people wanted to take photos and try to work out what it(the car) was”. I agree Dennis and I’m sure Larry Watson would too.